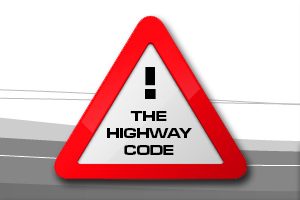 The Highway Code book is one of the most read in the UK, selling one million copies a year, however, it’s very unusual to have heard of someone that’s actually read the whole guide.

Yes, the majority of the highway code signs / road markings and car section has to be read because of driving tests altering from year to year since 1931 and with the addition of driving theory test in 1996. Research suggests that less than a quarter of UK drivers actually return to the guide once they have passed their test.

According to the Independent, the latest version of the Highway Code addresses a whole different driving environment, mentioning gridlock, environmental damage, cars driven by cruise control and the speed cameras that are appearing around the country. There are mixed opinions on the Highway Code – however, the guide is still generally recommended to know for driving in the UK but not essential, as no other country has anything like it. In the 1930s the Highway Code was only 18 pages of basic advice, nowadays it’s almost 100 pages.

The guide is not legally enforceable, but it does highlight the basic elements of traffic law. The instructions supported by law are identified with words like “must” and “must not”, whereas those that aren’t are worded with “should” and “should not”. Not complying with the rules doesn’t mean you are going to be punished in any way, but the advice can be used as evidence in court to establish liability, according to RAC.

Most of the points in the Highway Code are common sense but some people still forget the simple things.

For example, avoiding all in-car distractions, everyone remembers the obvious like not using your phone but other elements such as smoking can affect a person’s concentration levels – having to first light the cigarette and then making sure they don’t drop ash in the car etc. Eating and drinking is another one, having to look down to pick up what you want and then making sure you’re not spilling anything in the car – if you really need to eat or drink why not do it before you’ve set off/ got to your new destination.

Listening to music can also distract the driver – loud music especially which can mask other sounds such as sirens or other road uses warning you of a danger etc. and even changing the music as you would have to take your eyes off the road to look at the radio.

The Highway Code mentions other things which seem obvious but it’s likely you see a lot of them quite regularly. For example, poor indicating – this can be too much or too little, either way it can confuse the drivers around you and possibly cause accidents. Another reminder in the guide is that “signaling does not give you priority” and to not assume that the driver next to you will let you in just because you want to.

There’s also flashing your headlights – we’ve probably all done it and not realised it can be dangerous – for example indicating to another driver you’re letting them out but someone else seeing that as a sign as well, if you see this just take caution before moving. Something else that you probably think is just common sense but is stated in the guide: “you must ensure you do not hit anyone when you open your door. Check for cyclists or other traffic”.

According to the RAC between 2011 and 2015, there were 3,108 reported collisions where this happened as a factor in incidents attended by the police. Don’t forget to look ahead and check your mirrors and blind spots before you open the door. If you are unable to do this due to worn windscreen wiper blades, defective headlights or faulty wing mirrors, we can help. Worn brake pads and brake disks can lengthen the braking distances specified in the highway code, we can help with that too.

Enter your registration number or car details into the search box at the top of this page to find the right replacement parts for your vehicle.

There are lots of other things in the Highway Code that you should hopefully know but if you’re in any doubt just have a flick through next time you find it!