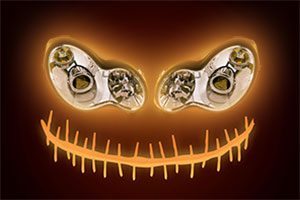 Halloween is just around the corner and you know what that means … SWEEEEETTTTSSSS! And of course, children hopped up on sugar!

It also means lots of scary films, which got us thinking …  what are the scariest cars that have appeared in horror films over the years? Well, grab a cushion to hide behind because here are 5 of the most terrifying horror movie cars!

Directed by John Carpenter in 1983 and written by the great horror novelist, Stephen King, Christine was a 1958 Plymouth Fury with a murderous rage. A young teenager decides to buy a rust bucket for his first car (Christine), which he restores to its former glory. What the boy doesn’t realise is Christine has a mind of her own, and after Christine is vandalised she decides to go on a murderous rampage, killing all of the vandals – scary stuff!

“Jeepers Creepers, where’d you get those peepers” (if you’ve seen the film, you will definitely have just sung that part and shivered a little bit). A particularly strange and terrifying film, Jeepers Creepers follows two teenagers as they travel home from college … however they are pursued by a terrifying winged man, creature … thing, that eats people … how lovely. What we remember most, is the beat up 1941 Chevrolet Coe the creature thing is chasing the teenagers in, with the number plate BEATNGU (be-eating-you). Fun fact, they made two more Jeepers Creepers films and they were truly awful!

If you’ve not seen the Mad Max re-imagination with Tom Hardy, go and watch it because it’s really quite good. Set in a post-apocalyptic world, Mad Max is being pursued by the “War Boys”, some not very nice, distasteful looking characters. What’s most notable are the absolutely terrifying modified cars (and terrifying people inside) that pursue Max in the film.

Our personal favourite is the “Gigahorse” driven by War Boys leader, Immortal Joe. A heavily customised vehicle, the Gigahorse’s chases is built from two 1959 Cadillac Coupe de Villes sitting on top of each other.

Ok, we know, it’s not really a horror movie … but it’s got ghosts in it and we couldn’t leave out the iconic 1959 Cadillac Miller-Meteor and its ECTO-1 number plate. Not scary at all and rather ironically designed to be an ambulance.

Yep, you guessed it … this one’s about a hearse. The 1980 film follows a young girl who is pursued by a black hearse owned by her late aunt who was a devil worshipper (you can’t choose your family!). Now if there was one car we wouldn’t want following us around, it’s a black hearse …

There you have it, 4 pretty scary cars and 1 not so scary, hilarious car! Let us know if there are any terrifying cars that we’ve missed off … and before you say it, not your first ever car!