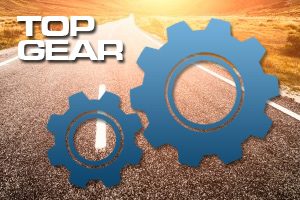 With the news breaking this week that former England cricketer Andrew “Freddie” Flintoff and Take Me Out presenter Paddy McGuinness will be taking over as presenters of Top Gear, we’re asking, can the duo keep one of the BBC’s most iconic show’s on the road, or is it time to wave the chequered flag and call it a day?

Whether you loved or hated Clarkson, May and Hammond you can’t deny they brought real personality to the show and built a brand that would be watched in 214 territories by over 350 million people around the world!

However, since the famous Clarkson “fracas” and the resulting disciplinary action that lead to the trio calling time on their Top Gear tenure, the show has been in a steady decline, really struggling to emulate the chemistry that the show had under Clarkson, May and Hammond for more than 12 years.

The show did limp on with new hosts, as the rather unlikely pairing of Radio 2 presenter Chris Evans and former Friends star Matt Le Blanc were awkwardly shoved together. Rather “unsurprisingly”, Chris Evans left the show after just one season amongst a barrage of negative reviews, declining ratings and reports that the relationship between the pair had broken down.

After Evans departure, Le Blanc took centre stage, along with co-hosts Rory Read and Chris Harris. Although ratings weren’t as high as previous series under Clarkson, May and Hammond, Le Blanc received extremely positive reviews from critics and viewers alike, with some saying he had “saved” the brand. I don’t know if my love of Joey from Friends contributed, however Le Blanc had a very endearing quality about him that you couldn’t help being drawn to, you could see he genuinely loved cars and loved presenting the show. Alas, Le Blanc quit the show in May 2018, stating “the time commitment and extensive travel… takes me away from my family and friends more than I’m comfortable with.”

So here we are in late 2018, with the announcement that Freddie and Paddy will be taking the wheel of the BBC cash cow. In what seems like a last-ditch attempt to save the show, it’s another unlikely pairing that may seem strange to a lot of people, however the Lancastrian duo may just have the likeable personalities needed to give the much-loved show a revival.

So, should Top Gear be cancelled? Our personal opinion is, not yet. Even with declining ratings, Top Gear is still a massive revenue generator for the BBC, sustaining a global web of TV rights deals and merchandise agreements that bring in tens of millions of pounds a year. Moving passed the financials, although at first glance the pairing of Flintoff and McGuinness does seem strange, the more you think about it the more it feels like they have the personalities to make it work.