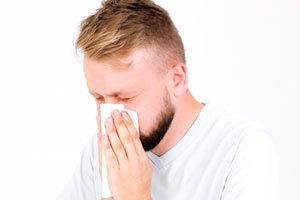 This may sound like a stupid question, but a new study has shown that driving with a cold could be as dangerous as drink driving!

According to the British insurance company, Young Marmalade, cold sufferers had slower reaction times, resulting in more sudden and frequent braking. They also found that cold sufferers’ driving was more volatile than healthy drivers and that they were also less aware of their surroundings.

This could be dangerous in even the most normal of circumstances but on the off chance the driver had to move quickly and carefully to get out of the way of an emergency vehicle, they may act more hastily at the last moment and cause and accident. The study showed that having a cold changed the driving ability, which had dropped to less than 50% – the same as drinking four double whiskeys.

Coughing and sneezing whilst driving can be risky – that split second your eyes shut involuntarily or when looking for the tissues could be the difference between seeing that car brake in front of you, or not. It could even mean changing the pressure you put on the pedals – for example effecting you on a busy junction or suddenly accelerating in slow traffic, putting yourself and others around you in danger.

A lot of people find that when they are feeling ill, they don’t get as much sleep as they need in order to feel better in the morning, to compensate for this they may take more medication than they should, which contains diphenhydramine or Benadryl, this can add to the feeling sleepier.

Being ill can also have a negative impact on a person’s mood and judgement – not just concentration levels, all of which are important if the driver wants to stay calm and not drive aggressively or dangerously. In the “Common Cold Unit” at Cardiff University, Wales, the researchers confirmed that less-alert drivers are a third more likely to crash into the roadside curb.

So, the short answer to this question would be “no”, but it’s really down to personal preference and how you feel on the road. If you don’t feel great then just hop on a bus, or even get a mate to pick you up. Don’t put yourself and others in danger if you don’t think it’s safe, leave the car at home – it’s not silly, it’s sensible.